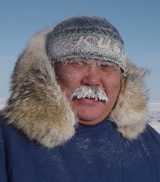 Late April is usually still quite cold, minus 25 to minus 30. It was then, in 1948 that Kusugaq and his wife, Kukik, drove their dog team up to Qatiktalik (Cape Fullerton), NWT (now Nunavut), on the west coast of Hudson Bay. There was an RCMP post there, with a grand house, “a veritable mansion,” Kukik would later say. It had a huge living room with a pot-bellied stove in the middle of it. The walls were pasted with magazine pages, Maclean’s 1936 with drawn and coloured advertisements. It had two porches, one with a coal bin in it. The other was an attached out-house with two holes. Out back was a yard with a stone wall all around it.

Beside the house was a warehouse, insulated with burlap bags, grand enough to be a house, at least better than the small sod hut that Autut had built for himself and his family down on the beach. This hut had wooden walls with sod piled up to the canvas roof on the outside. Kusugak and Autut were longtime friends. In Autut’s small hut, Kukik bore a baby boy, her first. They named him Arvaarluk after an old man in Chesterfield Inlet. Not long afterwards, the small family made their way north to Repulse Bay, “smack dab on the Arctic circle.” And that is where Arvaarluk spent the first twelve years of his life.

There was a Hudson’s Bay Company fur-trading post at Repulse Bay. The manager of The Bay had an old house. There was a store where people went to trade their furs for flour, sugar, tea, bullets and other stuff they needed. There was a warehouse and various other small outbuildings. There was a wind generator and a flagpole. The flag only went up the pole when there was an airplane coming. People lived in igloos in the winter and tents in the summer.

Michael’s family travelled by dog sled, hunting and fishing, building igloos where night found them. In the fall of 1954, an airplane landed on the water in front of the Hudson’s Bay Company trading post. It took Michael and some of his friends south to Chesterfield Inlet. And so began another kind of nomadic life, this time not in pursuit of seals, walruses, whales, caribou or fish but education. Before he finished high school, Michael had been to Chesterfield Inlet, Rankin Inlet, Yellowknife, Churchill and Saskatoon. But he never forgot the years he spent, travelling on the great expanse of sea ice on Hudson Bay, living in igloos and sod huts and the stories he heard every night, falling asleep in the flickering light of a qulliq – a soapstone, seal oil lamp.

Today, Michael lives in Rankin Inlet, on the west coast of Hudson Bay. He writes books for children and travels, telling the stories he heard when he was little. Michael’s friend and fellow writer, Martyn Godfrey, once told him, “Michael, I hear you have a reputation.” When Michael said, “Oh, no!” Martyn said, “But it is good. I hear you kept a hundred kindergarten kids mesmerized for an hour.” Michael said, “Martyn, that is not exactly true. It was only 85 kids and for only 50 minutes.” Sadly, Martyn is no longer with us but Michael has a reputation to keep.

Michael’s work has won the Ruth Schwartz Award for children’s literature and has been short listed for various other awards, the most recent being the Hackmatack Award, down east.

Some of his books have been translated into French, Japanese, Korean, and Braille. A PROMISE IS A PROMISE appeared in a Hollywood movie, “LEAVING NORMAL,” and was made into a play. The play has been performed across Canada and the United States, in schools and in theatres, like the Prairie Theatre Exchange in Winnipeg and the Young People’s Theatre in Toronto. It is also performed occasionally by the RAG AND BONE puppet company in Ottawa.

New: A Promise is a Promise and The Curse of the Shaman are available in E Book format